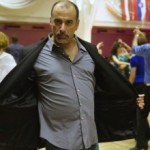 I have been dancing as long as I can remember. My first exposure to dancing came from my parents. Being Cuban, they would always get together with others from the Cuban community in Houston on weekends to play dominoes and canasta. Around 11:00 pm the ladies would invariably want to dance, so they would move all the furniture out of the living room and start dancing,. Children usually participated since the fathers were always reluctant and I always took my place whether I wanted to or not.

I began breakdancing at the tender age of 8 because it was cool and it allowed me to move to music I liked. By junior high school I discovered that guys that danced got the girls. I figured that while the other guys leaned up against the walls at dances, I would be the one dancing with the cheerleaders.

At the age of 16, my Dad introduced me to swing. He persuaded me to go with him to the Wednesday night dance by offering to buy me A BEER! Where I come from, that is powerful motivation for a 16 year old. He then proceeded to sign me up for lessons without my knowing. I could have killed him for that, or so I thought. However, after one hour of lessons, I discovered that all of the ladies in class (ages 25-40) wanted to dance with ME because I was the only one leading. I quickly decided to pursue this hobby a little further. The following weekend my father won the first Novice Traditional division ever offered in the Southwest Regional Dance Championships. It was there that I first saw two of my all-time dance heros, Robert Perez and Gary Long. Watching Robert dance was like watching smoke rise…smooth from the word “go”. Gary came out on the floor and DEMANDED your attention, something I have never forgotten. He later told me, “If they’re not watching, how are they going to give you a standing ovation?” Gary was the most influential person in my teaching style for partner dancing. He is probably the most charismatic teacher I have ever seen, and I still enjoy watching him teach whenever I get the chance.

During the next few months, my father stayed up all hours of the night showing me contest videos and teaching me every pattern I could handle. I was also very fortunate to work with the “Old Timers” from Dallas and Houston: people who did not do things by the numbers, but by feel. While most people won’t recognize the names, people like Robert Perez, Gary Long, Rose Marie Mallady, Jack and Joyce Wells, Truman McCullough, and Joe Comstock from Dallas; as well as Weldon Petit, Gilbert and Trish Huron, and Jack Scalise showed me more than I could ever hope for. It is to these people that I am truly indebted.

Aside from West Coast Swing, I have been blessed in having been able to travel the country through the various dance circuits since 1988. Traveling has allowed me to study all forms of swing dance with many of the legends within their perspective styles including Lindy, East Coast, Swing, Whip, Push, Jitterbug, Tulsa Swing, St. Louis Imperial, and Shag. But my dancing has not been limited to Swing..

I was part of “Dancin…The Company”, a jazz and tap group out of Houston for seven years. My coach and choreographer, Glen Hunsucker, is the single biggest influence I have had in my dance career. He was ruthless when it came to perfection and lightning quick when it came to choreography and learning. I once saw him choreograph the “Shaft” theme song (9 minutes) for the entire company of 16 people in 30 minutes, and it was PERFECT! Not a single nuance was missed in the song. It was at that moment that I began to truly appreciate his immense talent.

I also studied within the ballroom community at several franchise studios in and around Houston for several years and was fortunate enough to be trained in Country and Western dancing by Laurie Sepulvado, who I consider to be one of the best C&W instructors I have ever met. It was her instruction that allowed me to break into the country circuit back in 1991, where I have spent a major amount of my weekends since. With the help of people like Barry Durand, Mike Haley, Dave Getty, and Sue Wagner I was welcomed into their world with open arms.